3D Printing: Full Participation In The Basic Necessities Of Life Living In Space

3D printing technology not only can change rapidly with the aircraft flying cloud, and has long been out of jiuxiao, swim in the sky, full penetration into the space exploration aspects of role in the basic necessities of life, become one of the future space life. Although many projects are not perfect, but many achievements have made undoubtedly beckons bright prospects for 3D printing space. 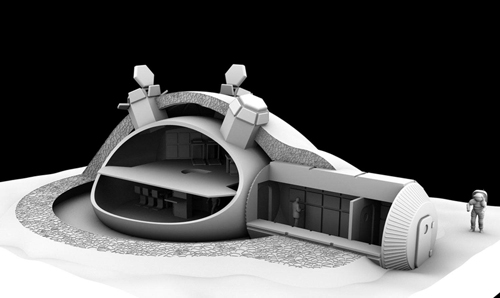 3D printing: full participation in the basic necessities of life living in space

Recently, China made large aircraft C919 successful maiden flight of the news a lot of people's heart. Among them, 3D printing technology by making more light components help the body weight loss, has made no small contribution to the successful completion of the flight. In fact, 3D printing technology not only can fly up to the clouds, but has gone beyond the jiuxiao, swim in the sky, full penetration into the space exploration aspects of role in the basic necessities of life, become one of the future space life.

The outer space environment, while the astronauts in extravehicular activities, as the body is separated from the outside only a protective layer, it is self-evident importance of spacesuit safety performance. In the United States and other space powers invariably choose to use 3D printing technology to manufacture the suit, in order to improve the safety index.

In 2015, China Aerospace Science and Technology Corporation R & D Center Hospital 211 factory process using 3D printing technology, realizes the integration of forming spacesuit ventilation flow distribution pipe and flange products. It can improve the reliability of products, ensure the safety of the extravehicular activity, and improve the development progress of the space suit. This technology has been recognized by the Chinese Astronaut Research and training center.

In April this year, NASA's Jet Propulsion Laboratory (NASA) is proposed for use in space metal fabric. The team hopes to reduce costs and create unique material. These fabrics can be used to help astronauts eventually shielding meteorites or other planets in harsh environmental conditions.

In order to ensure the normal eating in weightlessness, the traditional space food as much as possible to eat, not what tangtangshuishui. It is often done as a toothpaste paste, or something like biscuits, from appearance to taste is dull, not very delicious. 3D food printing technology after birth, this situation has improved hope.

Cornell University researchers are now developing space for 3D food printer. They will spend many time in the development of diversified tastes. Through the use of edible water colloidal suspension and flavoring agent, food produced a series of different printers can imitate the flavor and texture of food. The ingredients of the color can also be copied by the printer, to copy out the food with the genuine flavor. This allows the astronauts fresh in the meal, not anorexia. Such a machine is equivalent to a concentrated kitchen, limited storage space not only saves space, and eliminates the need for treatment of food packaging waste trouble, can shoot two hawks with one arrow.

3D printing houses have sprung up to help extraterrestrial materials

To solve the problem of food and clothing, 3D printing is also expected to help people to build houses to the outside of the planet. To the moon, Mars and even distant planet to establish a permanent residence, put a lot of building materials from the earth. The past is obviously not realistic. Responsibility of scientists was chosen to bear the alien 3D printing houses, it is the value of local materials, rapid prototyping skills.

In April this year, the Northwestern University researchers have developed a new 3D printing technology can be used for space exploration. They use the simulator to produce similar to the powder material in the surface of the moon or Mars can be found on the synthesis of a special ink 3D printing, and use 3D to print on-demand production objects. This technology can help build human alien residence.

Coincidentally, at the beginning of May, the European space agency scientists of earth material to simulate the volcano and dust solar furnace made of raw materials, and then became the "moon brick by 3D printing processing". Next, the researchers simulated lunar environment experiment, observation under vacuum and high temperature environment can also print out 3D bricks. The ultimate goal of the project is built on the moon.

Compared with clothing, food and space space alien architecture, 3D printing is currently used in the field of spacecraft is more extensive, because this is the basis for human activities in space. The main contribution of the spacecraft 3D printing is to improve production efficiency, make component maintenance more convenient.

The spacecraft in orbit maintenance and parts replacement and the realization of self replicating spacecraft is a difficult problem in aviation field for a long time. The traditional solution is often the new parts by the rocket into space to install time-consuming. Now through the international space station and space platform for 3D printing, can be directly in space to produce aircraft parts replacement of aging or damaged, and contribute to the self replicating spacecraft.

Through the above introduction can see, 3D printing applications in space in the life of this subject are still at the initial stage, a lot of technology is still not perfect, need further exploration and application scheme of more diversified needs further research. Nevertheless, has achieved these results undoubtedly merged into a good start, shows the bright future of the space 3D printing.
Related News