The evening of September 7, 2016, the Brazil Paralympic Games held a grand opening ceremony in rio. In the wonderful Paralympic Game Show, one of the show is the most prominent U.S. Paralympic skier Amy Purdy wore a 3D print dress fascinating, and dance with a KAKU industrial robot, so that people can not help but to think in the rapid development of science and technology, the relationship between human beings and technology. It is reported that the body of the Amy Purdy the 3D print dress was designed by Danit Peleg, a 3D printing fashion designer and this is our love.

The 36 year old Amy Purdy had won the eighteenth season of dancing with the stars "(ABC Dancing with the Stars) program" runner up. It is understood that the Purdy at the age of 19 due to bacterial meningitis lost both legs. However, the disabled and not be able to stop her leg in 7 months installed after she started skiing again. In the 2014 Paralympic Winter Games, she also won a bronze medal. 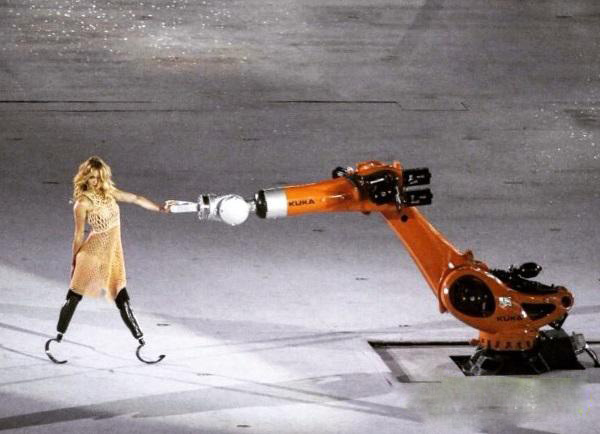 Israeli fashion designer Danit Peleg said she was touched by Purdy's life story, which is designed for her this dance costume inspired. It is reported that this dress Purdy on stage is complete with desktop 3D printer manufacturing. The designer said, Purdy's story represents rebirth, let her thought of Botticelli's "birth of Venus". Then, she uses the diamond pattern in the dress, is to represent the composition characteristics of the picture (see below), and the nude is a symbol of Venus's naked.

"I love this dress design for Amy Purdy's ideas, though his legs amputated, Amy Purdy is still a strong and beautiful women." Peleg in her blog: "the strong character in the incredible and the help of technology, Purdy can not only walk, but also be able to obtain the Paralympic medals, dancing with the stars, even able to dance on the grand ceremony in the Paralympic games!"

It is reported that this print dress material is used by Filaflex flexible wire, because the Peleg hope that athletes can wear it freely on stage, stretch its graceful dancing. Like other clothes Peleg, this skirt is a desktop 3D printer, spent a total of 120 hours. Peleg is using the latest version of the Witbox 3D printer, she is using AccuMark modeling software and Blender.

Purdy in the comments in such pieces of 3D printing clothing for dance when I said: "this is a great architectural style of clothing, it actually often move. After that it should hang in the museum." However, the player also mentioned that she thinks 3D printing fashion potential is enormous, especially with the continuous development and improvement of material. "I think the creative and design 3D printing clothing is infinite. I have been told the Danit that it is very suitable for the red carpet or like the New York Metropolitan Museum of Art charity ball (Met Ball) this occasion, I hope the first to be invited." She added.

Danit Pele said that this dress is part of her latest series of clothing design. In the blog, she said: "when I was in Purdy design clothes, and thus get new inspiration, I prepared on this basis will be expanded to include a complete series of 5 styles."
Related News